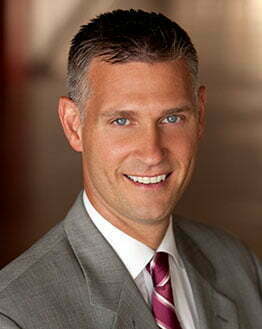 Troy A. Wallin is a member of the Arizona Bar and the Nevada Bar. As a Gilbert, AZ business attorney, he practices primarily in the areas of corporate law, securities, real estate, banking law, and administrative law, including private placements, SEC filings and compliance, mergers and acquisitions, securitizations, commercial litigation, and general business law.

Troy’s acumen as an Gilbert, AZ business law attorney is best demonstrated by the long list of clients that he has counseled on a broad range of corporate, real estate, securities, banking, and general transactional matters, including:

After spending two years in Sapporo, Japan as a missionary, Troy returned to Brigham Young University to receive a B.S. in Accounting in 1994 from the prestigious Marriott School of Management, where he received a Dean’s Scholarship for academic excellence. He then received a J.D. in 1997 from the George Washington University Law School, where he served as Editor and Member of the George Washington International Law Review. Troy clerked for Judge Rudolph Gerber of the Arizona Court of Appeals in 1995.

Troy’s pride and joy are his wife, Stephanie, and their five children. He enjoys taking his boys camping and fishing, as well as preparing them for careers in professional sports. Troy is an avid basketball player and fan, having been named player of the week in the Las Vegas City basketball league and winning the George Washington University intramural basketball championship during his second year of law school. Troy’s younger brother, Kurt, was a starting defensive tackle for the Arizona State University football team until 2001, where he was a PAC-10 leader in sacks and forced fumbles.

Troy was born and raised in Mesa, Arizona, where he graduated from Mountain View High School in 1988.